Good morning! Happy St. Patrick's Day! While I'm out celebrating my heritage, I'm sharing with you another part of my recently submitted story, Silent Surrender. This is the story with the Irish football coach who has come to the Scottish Highlands because he can't get the heroine, Meggie, out of his mind after their amazing weekend. In this snippet, Quinn is sitting at the bar and Meggie is working as the lead bartender. In honor of the holiday and Quinn, I give you Silent Surrender:


When the games began to finish and the crowds fell away, Ewan left her in charge and went home for the night in the arms of his on-again-off-again girlfriend. Meggie needed to do another round of dishwashing. She'd put off working around Quinn long enough.
“You’re still here?” She gathered the empty glasses and dirty napkins left from his entourage. “No signatures to give out or lasses’ numbers to collect?”


“None.” He took the last swig of his drink and set the empty glass in front of her. “I’ll have another.”
Only a few lads still sat watching the last of the night’s games.
“So tell me,” she began while refilling his glass. “You’re on holiday. Is this all you intend to do? Sit in the pub, watch football matches, and drink?”
“I’m only waiting to hear from my lovely lass when our date will be.”
“I’m not your lass and are you familiar with the phrase when hell freezes over?”
“Oh, but you already agreed.”
“Aye, but that was to get you to stop holding me hand.” She pulled another rag out of a bucket by her feet, grabbed a small tray and walked toward the far side of the bar, the area with the pool tables and several empty glasses and dull bar lights. No doubt he would be watching her. Hopefully her knees would keep solid.
“Margaret MacDougall, I thought you a better person than that.” He took a sip of his drink and sauntered over toward her. “You, trying to get out of our deal. I’ll not take no for an answer. Come on. You said yourself we had a good time together. I’m only asking for a few more good times with you.”
She tossed the dishrag onto the tray and pressed her free hand to her hip. “I’ll not go to bed with you again.”
“I’m not asking you to. I enjoy your company out of bed too, you crazy woman.”
What was she thinking even considering this? In only a few hours, with a load of people surrounding them, he’d broken down her wall of defiance. What would he be able to do to her resolve when it was just the two of them? She moved to the corner table.
“Meg, it’s one more long weekend, a few more days to share stories. A chance for you to play tour guide in your hometown.” He crowded close to her, trapping her between the wall, the table and him. “Do you not remember our site-seeing in Dublin? Temple Bar, Jameson Distillery, the Guinness Storehouse. We even met up with your friends and took that River Liffey tour.” His fingers drifted up to her cheek and brushed against her skin.
The tray wobbled in her hands, clinking the glasses together. She set it on the table before she dropped it. “Yes, I do remember that.” Don’t look up. “It was grand.” Don’t react. No doubt, people would be watching. His hand slinked in to cup the back of her neck, his fingers rubbing her skin and igniting shivers down her spine. “But...”
His eyes twinkled and a sexy smile tugged at those luscious lips. Memories of that mouth caressing her skin, taunting her into wild, frantic orgasms, even now made her weep with need.
Damn, her knees quivered. Yes, she wanted him, wanted this, but she could not be this irresponsible.


Quinn slid his knee between her legs, tipped her head up. “Shhhh. No buts.” His mouth covered hers, warm, strong and oh so demanding. She dropped one hand on his arm and pressed the other along his chest. She’d meant to push him back, but the feel of his abs through his shirt joined with the pressure of his knee against her intimate places to stir her desires. In her ears, her heartbeat steadily rose. His tongue pushed against her lips, gentle but insistent.
Like a starving lass, she surrendered to him and welcomed him into her mouth. Swift and in control, he swirled his tongue around hers, along the roof of her mouth, and ended the sweet torture with a quick taunt of his tongue’s tip against hers.
Too soon, he pulled back, leaving her body trembling for more. “Tomorrow. I’ll come for you here at four.” His hand moved back to her cheek, to a sweet sweep of her jaw line with his thumb, and then he released her completely. “Goodnight, Meg.”
As he turned and walked toward the pub door, her traitorous body begged for more time with him. The question was, could her brain convince the rest of her how dangerous this could be?
Posted by Alexa at 12:02 AM

Alexa
I am an author, a contest winner, a teacher, an editor, a critiquer, an online writing class instructor, a traveler, a hopeless romantic, and an optimist. I write romantic suspense and contemporary romance for Decadent Publishing! 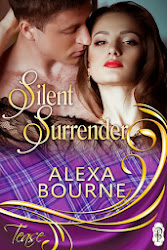 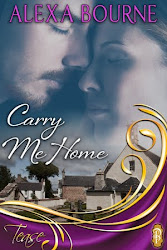 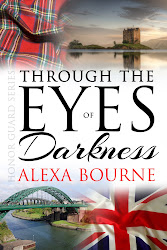 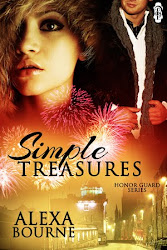 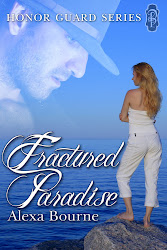 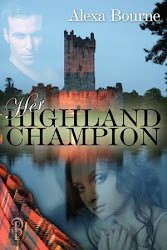 Where else you can find me 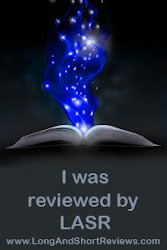 Sites You Should Visit